Gaudy neon creations tell the story of Las Vegas|Arts and Styles|chinadaily.com.cn
Justin Favela of the Neon Museum, with more than 150 signs from defunct Las Vegas hotels and casinos. Isaac Brekken for The New York Times 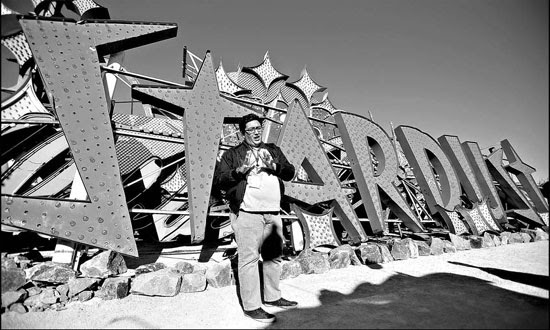 LAS VEGAS - At a gala event before the opening of the open-air Neon Museum here,
Brian Leming, a retired neon sign designer, stood surrounded by 150 hunks of metal and glowing glass.
The museum, which opened last month after 15 years of effort, and its signs,
dating from the 1930s to the '90s and arranged along a mazelike path, are increasingly
seen as expressions of history, art and architecture, worth preserving.
Mr. Leming, 72, recalled a design meeting for the Stardust Hotel-Casino, then run by
Frank "Lefty" Rosenthal, a Las Vegas bookmaker and kingpin.
"We were sitting around a conference table and arguing about the right shade of purple," Mr. Leming recalled.
"And I'm thinking, Jesus, they're discussing the nuances of purple, and this is Frank Rosenthal!"
Mr. Leming is a craftsman from a bygone era, when people heated and bent glass tubes,
filled them with neon and argon gas, cut and shaped metal and fiberglass, and then hoisted them onto buildings and above roads.
The museum had drawn 20,000 visitors a year by appointment only, plus photo and film shoots,
even before it officially opened.
Bill Marion, chairman of the museum's board, said the museum would get people to realize
Las Vegas has made a significant cultural impact worldwide.
Mr. Leming had tried for 20 years to gain support for preserving the signs as many
Las Vegas properties were demolished. "'If you're going to knock it down, let's save it,' I would tell them," Mr. Leming said.

For years the signs sat in a dusty lot. Then in 2005 a quirky building with a roof shaped
like a seashell, from La Concha Motel, was donated to the museum. The 1960s lobby,
designed by Paul Revere Williams, would become the museum's visitor center.
Cutting the building into eight pieces, moving them six kilometers north and reassembling
them cost $1.2 million. Adding offices, restrooms and an outdoor deck cost another $1.6 million.
When a place receives as many visitors as the Las Vegas Strip - 41.5 million passengers
passed through McCarran International Airport last year - that can add up to a lot of stories.
Mr. Marion recalled a Venezuelan brother and sister in their 30s who teared up in front of the
Stardust sign. Their parents had gotten married at the hotel but had never been back;
the siblings grew up seeing the photo of the newlyweds on the wall.
On a recent tour, Justin Favela, the programs coordinator, paused at a giant H.
"This came from the Horseshoe casino, owned by Benny Binion, who may or may not have killed someone,"
he said. "When I gave the tour to Binion's son, Jack, he said, 'You don't have to sugarcoat it.'"
Danielle Kelly, the museum's executive director, said the value of the signs went beyond personal memories,
showing a "design that has happened here could only have happened here."
Several fonts were created and became widely used, including Atomic Age letters from the early signs of the
Stardust, which was demolished in 2007. "All this was developed in a so-called cultural wasteland," she said.

Two cowboys stand next to each other, their arms crossed, their
legs spread,
and their brightly colored neon chaps overlapping, the
right leg of one merging with the left leg of the other.
They were familiar sights, these neon cowboys, to anyone who visited the
Mapes Hotel-Casino in downtown Reno before its 2000 implosion.

After it opened in 1946, the Mapes was for a long time the biggest,
most modern hotel in the city.
It featured top entertainers in its Sky
Room and became the select place to stay for celebrities,
including Clark Gable and Marilyn Monroe when they filmed "The Misfits."


The shine didn't last. When the Mapes closed in 1982, it was so out
of date,
the elevators still were human-operated. Still, there's plenty
of nostalgia for the old place,
as well as for other Reno landmarks that
became regular stops for tourists.
Those memories are the main
attraction of "The Light Circus: Art of Nevada Neon"
at the Nevada
Museum of Art through Feb. 10.
Reno collector Will Durham has
worked for the past decade to build the collection.
He and the museum
joined forces to restore, rewire and relight the pieces that truly

represent Reno's and the rest of Nevada's appeal through the mid-part of
the 20th century.
Neon was essential. Most of the best-known
images are gone now, but the exhibition
includes yet another cowboy,
this one in the shape of the state itself, cowboy hat worn
tilted on the
side, hand raised in greeting, and chaps ablaze; he stood over the
entrance
to the Nevada Club, now incorporated into Harrah's Reno. There
are images from Harolds Club,
also now incorporated into Harrah's, and
signs from other businesses, most notably
Parker's Western Wear, a
destination in and of itself. (160 W. Liberty St., Reno; 10 a.m. to 5
p.m.
Wednesdays through Sundays, until 8 p.m. Thursdays; $10, $8 senior/
student, $1 children 6-12; 775-329-3333 or nevadaart.org).

Neon art from one of Britain’s brightest talents

Neon art from one of Britain’s brightest talents - Art - How To Spend It
Kitsch cool: brilliant, bold and beautiful creations to light up lives

This month, his Circus of Soho pop-up shop opens on Beak Street
(from
November 20 to January 15), where a selection of illuminated artworks

will go on display. “Neon has a soul – it lives at night, creating
poetry with light,”
he says, whether it “promises love in Soho or hot
bagels”. His work, in short, is always brilliant.

Neon Art That Speaks to the Heart

For anyone who's ever experienced the highs and lows of being in love,
you'll appreciate these
neon sculptures by Olivia Steele. The London and
Berlin-based artist creates intimate statements
that evoke an emotional
response. For last year's Frieze Art Fair, she placed her neon signs in
public
spaces all around London in an exhibition she appropriately
called Public Displays of Affection.
As she writes on her website, "From
an East London lingerie shop to a historical religious landmark,
over
the Mile End foot bridge and above ordinarily dingy public toilets, her
artworks have become
beacons spanning the city – a yellow brick road of
illuminating lyrical sculpture."