There is art that perplexes the mind - such as the neon illuminations of Chris Bracey - and craft that stirs the soul - such as the monkfish osso buco at Scott's in Mayfair. Perhaps unsurprisingly when you combine the two, the results can be spectacular. Following an invitation from the Caprice restaurant and Birley groups, GQ has entered into a competition where luxury magazines - including LOVE, Tatler and Sunday Times Style - design bespoke winter displays to raise money for charity.
For more .....http://www.gq-magazine.co.uk/entertainment/articles/2013-12/05/chris-bracey-artwork-scotts-mayfair

These Neon Lights Show The Growth Of Shanghai’s Urban DNA

Shanghai is, unfortunately, seeing record levels of smog lately, but there's no sign of dull toxic haze in this neon display by artist Lu Xinjian. "City Light" is a glowing part of I Love Shanghai, an exhibition at the local Art Labor gallery; here, pop stylings and primary colors actually show the real-life urban grid—with a Google Earth by way of Keith Haring vibe.

The flash-enabled display blinks and grows out from a single blue square into an abstract map that's originally drawn from satellite data.
Xinjian has been giving the world's most recognizable metropolises a somewhat playful geometric angle for years now, reducing these hubs to abstract shapes and brightening them up enough to make them all but unrecognizable. Could you make out New York, Zurich, or Madrid from above? [designboom] 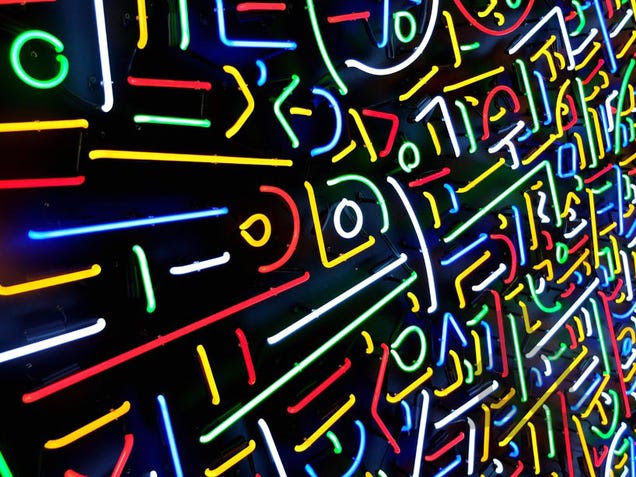 Chryssa, Artist Who Saw Neon’s Potential as a Medium, Dies at 79 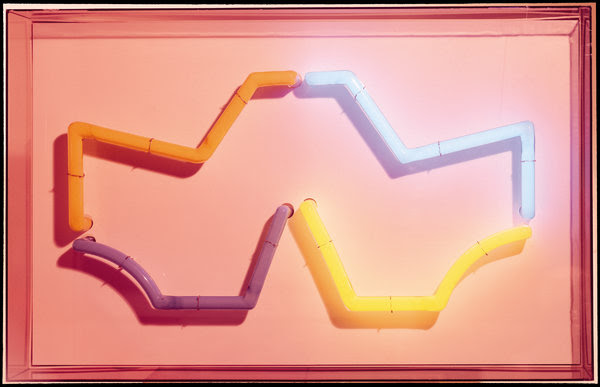 Chryssa, a Greek-born American sculptor who in the 1960s was one of the first people to transform neon lighting from an advertising vehicle into a fine art medium, died on Dec. 23. She was 79.
Her death, which was reported in the Greek press, was not widely publicized outside the country. Perhaps fittingly for an artist whose work centered on enigma, the place of her death could not be confirmed; the Greek news media reported that she was buried in Athens.
Chryssa, who used only her first name professionally, had lived variously in New York and Athens over the years.
A builder of large-scale assemblages in a wide range of materials — bronze, aluminum, plaster, wood, canvas, paint, found objects and, in the case of neon, light itself — Chryssa, whose work prefigured Minimalism and Pop Art, was considered a significant presence on the American art scene in the ’60s and ’70s.
Exhibited widely in the United States in those years, her art is in the collections of major museums, including the Museum of Modern Art, the Guggenheim Museum and the Whitney Museum of American Art in New York, and the Corcoran Gallery of Art in Washington.
for more...
http://www.nytimes.com/2014/01/19/arts/chryssa-artist-who-saw-neons-potential-as-a-medium-dies-at-79.html?_r=0 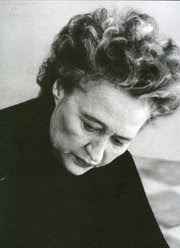 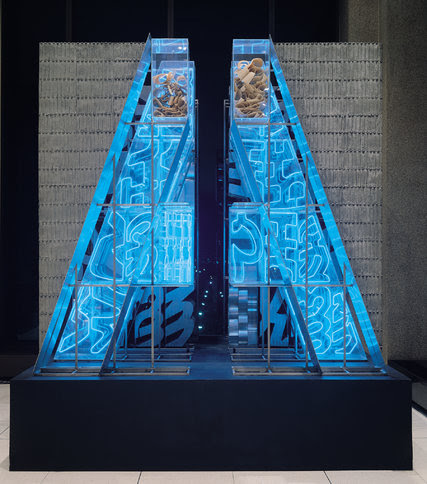 Inside 'Gods Own Junkyard,' One Of The Largest Neon Collections In The World

Whether you associate the intoxicating visual phenomena that is neon with the world of fine art or the world of strip clubs, there's no denying there is something strangely addictive about those electric colored lights. London-based neon artist Chris Bracey certainly agrees, given that he's spent the past 40 years making and collecting all things neon.
Whether they depict an artsy conceptual paradox, a commercial design or the classic "Girls, Girls, Girls," Bracey's neon signs cater to that primal urge within all of us to reach out and touch something shiny. His neon haven, which he's christened "Gods Own Junkyard," combines the works' heavenly glow with the seedy underbelly of their Las Vegas origins. His crop features neons made by his father in the '50s jammed up against neons plucked from Blockbuster movie sets or an art gallery. "It’s in my blood," he told Schon Magazine. "It’s like visual cocaine."
We spoke to the neon obsessive about his unusual addiction and passion for flashing lights.
http://www.huffingtonpost.com/2014/02/17/gods-own-junkyard_n_4775832.html?utm_hp_ref=arts 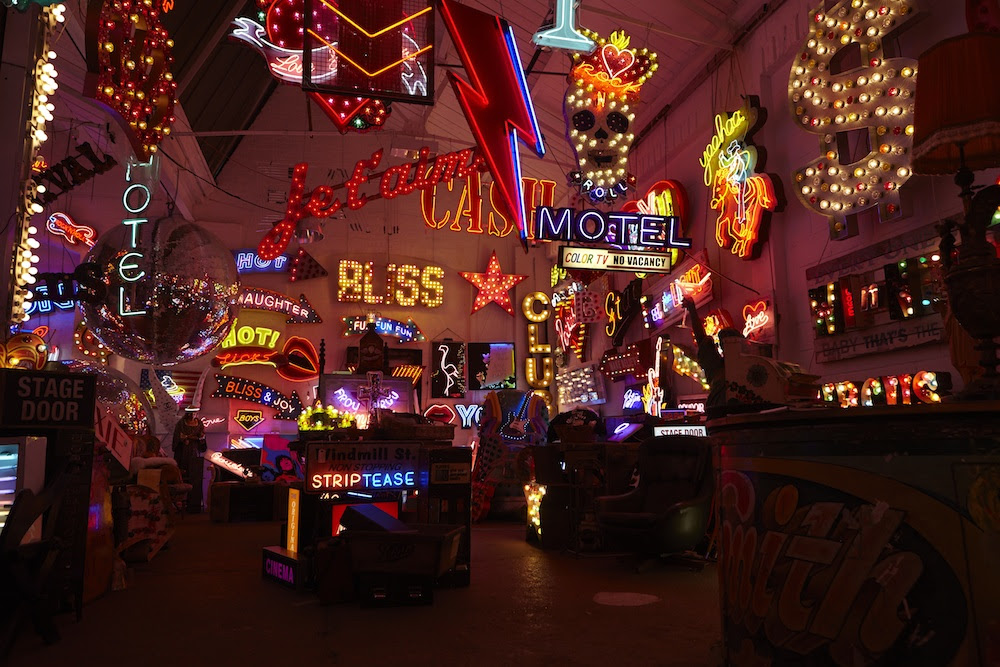 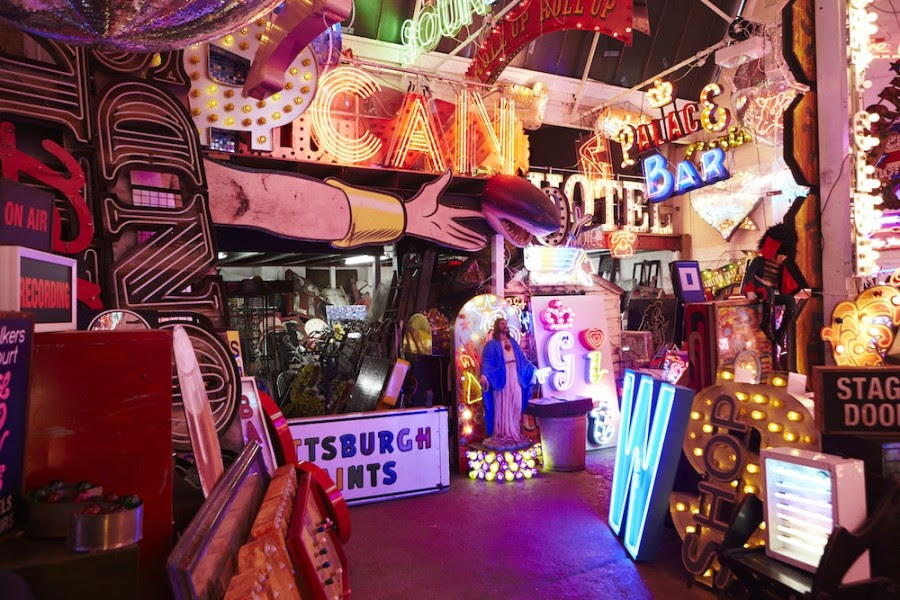 When the sculptor Keith Sonnier arrived in the late 1960s, he was identified with other young radicals like Richard Serra, Eva Hesse, Bruce Nauman and Lynda Benglis as “Post-Minimalist,” a catchall term that immediately wrote them into history books. The label was meant to distinguish them from their slightly older, Minimalist contemporaries, including Sol Lewitt, Carl Andre, Donald Judd and Dan Flavin, all of whom used inflexible materials for impersonal, geometric objects manufactured by others.
The Post-Minimalists, on the other hand, made art out of cheap, even flimsy materials they manipulated by hand to evoke the more sensual properties of the human body. Sonnier’s works, fashioned from cheesecloth, silk, wire mesh, latex or the neon that became his signature medium, were especially supple and erotic, often made on the spot in the galleries where they were shown. Flavin’s fluorescent lights were straight lines; Sonnier’s twisted and curved, almost dancing in space.
“Flavin called us Dada homosexuals,” Sonnier said the other day in his native Louisiana drawl, recalling the rivalry between the two camps as a form of camaraderie. “We were all in the same shows,” he said. “The only real difference is that they used hard materials and ours were soft.”
These days, Sonnier, now a burly, white-haired 72, works with both. “Elysian Plain + Early Works,” a buoyant show of his wall-mounted neon works (some new, some vintage) at the Pace Gallery in Chelsea, maps his trajectory from the ephemeral to the durable, a path elevated by the artist’s suggestive wit. In one early piece, “Neon Wrapping Incandescent,” a pink neon curlicue rises between two nipples of incandescent blue bulbs, their wires dangling to the floor like black veins. “It’s like lingerie,” Sonnier said, laughing. “Very Frederick’s of Hollywood.”
Two other neon works from the period suggest tables or chairs that have materialized out of thin air. “They’re about aligning space with architecture,” Sonnier explained, pointing to “Mirror Slant,” a kind of slumping torso made a few months ago, as another case in point. Composed of three sections divided by yellow, red and blue lights, it has a square glass bottom that looks as if it’s sliding drunkenly off the wall, but is supporting a mirror that reflects another piece on the opposite wall, call-and-response style. 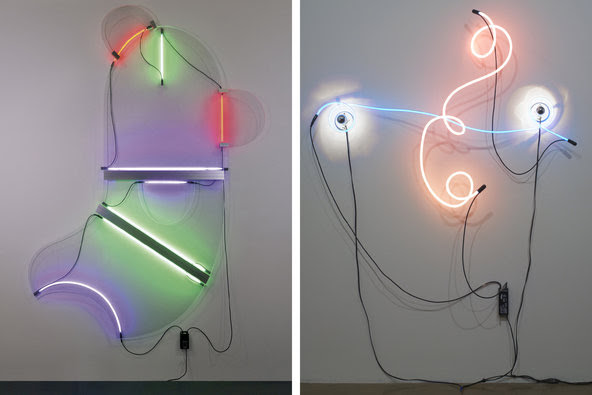 The other recent works, made over the last three years in Sonnier’s Bridgehampton, N.Y., studio, similarly balance sturdy geometrics with weightless froth. “Lobbed Claw” has short, curving strokes of blue, red and green neon floating behind thick, elliptical planes of clear plexiglass that combine to form the shape of a painter’s palette. This Sonnier compared to Wonder Woman’s translucent airplane. “Gorgeous,” he said. “Schmoo” — the title is a nod to his Cajun roots — looks like a transparent grand piano lid with steel hinges highlighted in pink, blue and green.
Because his works emit light that’s extremely flattering to both viewers and the surrounding space, he has taken steps to keep them from becoming merely decorative objects. He doesn’t hide wires or transformers; as with the flesh-colored latex he smeared with tacky flocking early in his career, he exults in what he calls the “perversity” of his materials. He also embraces the illusionism that was anathema to the Minimalists, creating a sense of depth by placing his colored lights on or under reflective glass or mirrors that put viewers inside them.
As a younger artist, Sonnier experimented with nascent technologies, collaborating in 1977 with the filmmaker Liza Bear on “Send/Receive,” which connected galleries in New York and San Francisco via a live feed bounced off a NASA satellite. The expense and logistical difficulties of the two-day operation have kept him earthbound ever since. For his next project, he’s collecting large stones and painting them.
http://tmagazine.blogs.nytimes.com/2014/01/27/artifacts-the-sensual-suggestive-appeal-of-keith-sonniers-neon-sculptures/?hpw&rref=t-magazine 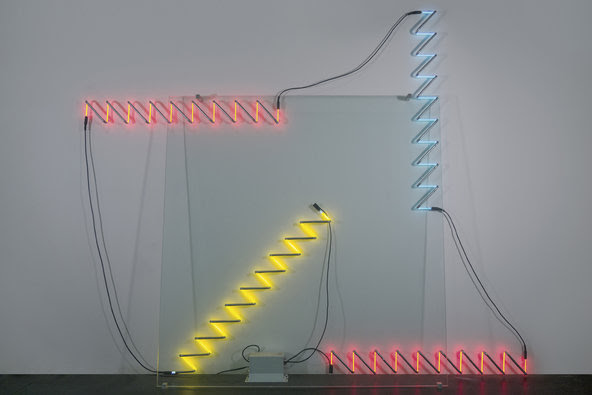 Chris Bracey’s iconic art, incorporating woodwork rescued during the conversion of Ogilvie Hall in Thorpeness, can be found in the homes of film stars, musicians and celebrity chefs across the globe.
The hall’s antique floorboards, upon which the renowned composer Benjamin Britten once rehearsed, were discovered in a skip by Mr Bracey during one of his regular visits to the coastal village.
Determined not to see the relics go to waste, he hauled the timber home and involved it in his designs, many of which have since sold for thousands of pounds to famous clients including Victoria Beckham, Jude Law and Jamie Oliver.
“It’s quite remarkable really,” he said
The flooring was also used to make a neon star for the television show Kirstie’s Homemade Christmas. Presenter Kirstie Allsop described the work as “a triumph” and praised its beauty.
Mr Bracey’s other work has featured in blockbuster movies such as The Dark Knight Rises, Charlie and the Chocolate Factory and World War Z.
The 59-year-old artist says he has had “a love affair with neon” ever since his father, a former miner, began making signs in the 50s.
“I love neon, I almost consider it a living thing,” he said
“Neon loves the dark, it is like a beautiful woman, it wants to be looked at, it wants to be seen and it wants to be loved.”
A Londoner, born and bred, Mr Bracey describes Suffolk as his “bolt hole” where he comes to escape the pressures of city life.
After many years holidaying in Aldeburgh, he and his wife Linda bought a rundown wooden cottage in Thorpeness which they demolished to make way for their “Shangri-la”.
“All I ever wanted in the world was to live in a house on a dirt track looking out across the trees and so that was it for me, something I’ve wanted more than anything else in the world,” he said.
“It’s a fantastic village and all the local people are so friendly and nice.”
Taking timber from the cottage, built for servicemen during the Second World War, Mr Bracey made a collection of neon designs themed around love.
“I took a building that was created for war and made all things to do with love,” he said,
“It became really popular and sold all over the world.”
Although Mr Bracey credits his father for teaching him the “dark art” of making neon, he thanks his mother, Doreen Bracey, a Great Bricett resident, for his nurturing his creative talents.
“My mum had an appreciation and love for art and I think that’s the reason I’ve been a success,” he said.
Mr Bracey runs his own gallery, God’s Own Junkyard, in London and also has a permanent display in Selfridges.
“Every time I make a piece, that effect when I switch it on for the first time takes me back to childhood, it’s such a fantastic feeling,” he said.

A new neon message is greeting visitors to central Walthamstow

A new neon message is on display in a Walthamstow street.
Artist D J Roberts installed the message reading ‘I’m in love with the modern world’ at the council’s Street Gallery in Cleveland Park Avenue.
The line is taken from the song, Modern World by Jonathan Richman and the Modern Lovers.
“I have always endorsed the view of the 19th century critic John Ruskin – that many places seem beautiful, and have the potential for beauty, not because the architecture or the setting is sublime, but because they give us a psychological hit, they capture a mood,” Mr Roberts said.
“They are places where things can happen. And Richman’s use of the word modern interests me. Like him, I tend to use the word loosely, to describe that urban world of highways, shopping malls and bright lights which we all know so well, and to which Walthamstow belongs.”
Street Gallery, a Waltham Forest Council funded programme of temporary art displays, has been open since September 2012.